No End is a webcomic about a group of people struggling to survive in a post apocalyptic country ravaged by an unyielding winter and hordes of undead. Living amid a world of horror doesn’t erase the cast’s day-to-day worries about identity, family, friendship and betrayal, as they seek people they can trust, as well as a legendary place called “Haven” rumored to be free of the cold and horror.

Just as none of them are sure that it even exists, they aren’t sure what their place in their world is. But each step forward leads towards who they are, who they should become, and where they belong.

Due to it’s initial inspiration from an RP shared by the creators, No End has always strongly focused on its characters - their growth, their motivations, and the bonds woven between them. The post-apocalyptic setting is used to add suspense, and to put emphasis on the characters’ internal struggles. No End also features LGBTQA+ themes and characters – all the characters in the main cast are queer.

The comic updates every Sunday and Wednesday!

Please follow the comic’s Twitter and Tumblr accounts in the top menu for news, Q&A’s, and extras! 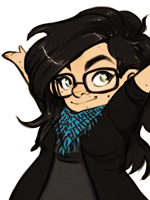 Erli lives in the capital city of the great country of Finland and works in mobile game development. Most of her free time Erli spends reading books, playing video games and watching movies and TV series. An easy-going and positive person, Erli believes that glass is always half full, panicking doesn’t do anyone any good and being kind to people doesn’t cost you anything. Erli loves her characters dearly and is more than willing to talk about them with you! The reclusive, very queer Kromi lives in central Finland with their wife, three cats and a jungle worth of houseplants.They can be most often found playing videogames and consuming copious amounts of popular culture. Although timid by nature and difficult to approach, Kromi is probably a nice person and you can hit them up for a conversation whenever. They're rather passionate about certain topics and very eager to answer almost any and all questions readers propose, so you'll often have to deal with their awkward snark in the comment section. Ask about worldbuilding if you want to witness some impressive tl;dr.

(you can reach both Erli & Kromi through here)

No End logo made by Raffe.
The font used in lettering is Ames.